Amazon Web Services supports the creation of a network running on their infrastructure that is rich enough for separate public and private subnets just like you may have done in the past on your own internal network. The difference is that the machines, or EC2 instances, running in these Virtual Private Cloud subnets can also be situated in different data centers, or Availability Zones, in front of an Elastic Load Balancer that should be resilient to individual machine failures or even entire data centers failing. Very few companies hosting their own machines have that capability, and as a bonus this can be accomplished by developer.

Amazon provides a wizard for creating a network with separate public and private subnets, and steps to setup a load balancer for a network, however, to assemble a working combination of the two with multiple-availability zones can prove frustrating for those of us with limited experience with networks. In particular, ELB’s have their own idiosyncrasies and correctly connecting it with the other resources on the network has some pitfalls. 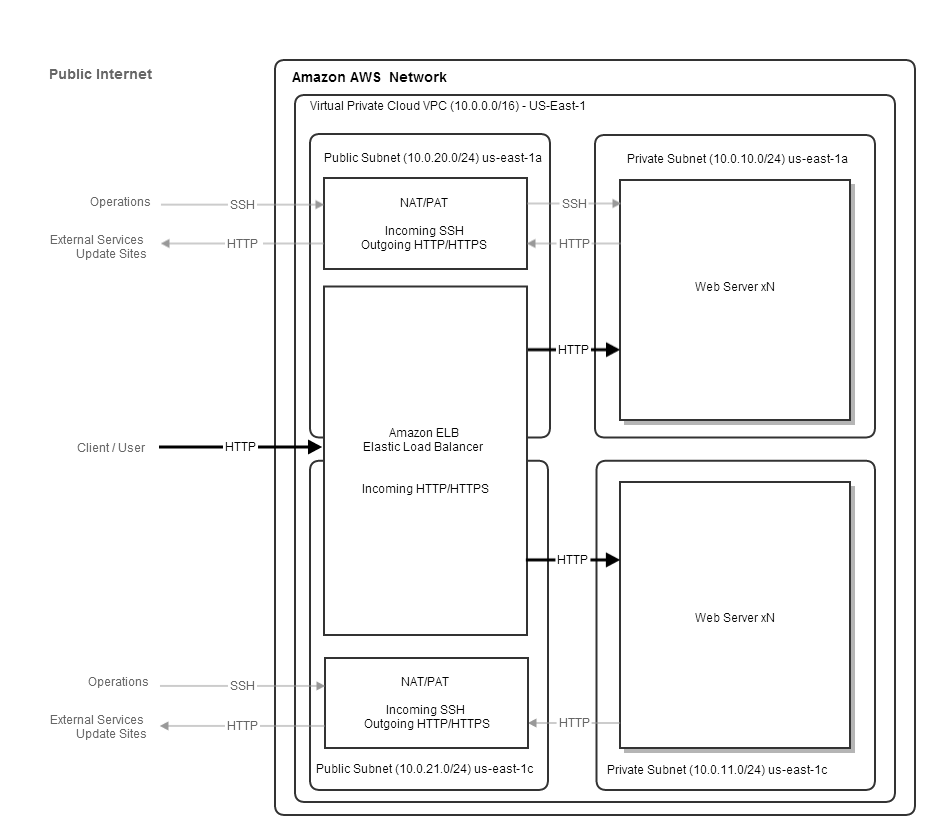 The illustrated network aims to provide a starting point to support scaling, with load balanced multiple web instances, that is resilient to machine and availability zone failures, while limiting direct access to the web instances.

Web requests from users are received by an Elastic Load Balancer that forwards on traffic to healthy instances in private us-east-1a and us-east-1c availability zones. The ELB is a custom network resource provided by AWS. The Web instances are normal machine instances running a web server.

The Web Server instances are in a “private” subnet so they are not directly accessible from the public internet. Inbound HTTP traffic is handled by the ELB, however, we would still like to SSH into the machines for administration purposes, and for the web servers to be able to access external services, such as OS update sites or remote datastores. To accomplish this there is a NAT/PAT instance running in each availability zone’s public subnet that can route inbound SSH traffic through to the web instances in the sibling private subnet and outbound HTTP traffic from the web instance. The Nat/PAT is a normal machine instance with firewall settings for forwarding traffic.

I have supplied a CloudFormation template that will create the network with all the resources. You will need to provide some configuration and supply the AMI’s for the NAT and web instances.

For getting started with the creating a network stack from a template see: http://docs.aws.amazon.com/gettingstarted/latest/wah-linux/getting-started-create-cf-stack-proc.html.

Use the CloudFormation Console’s “Create Stack” with the following template file: aws.template 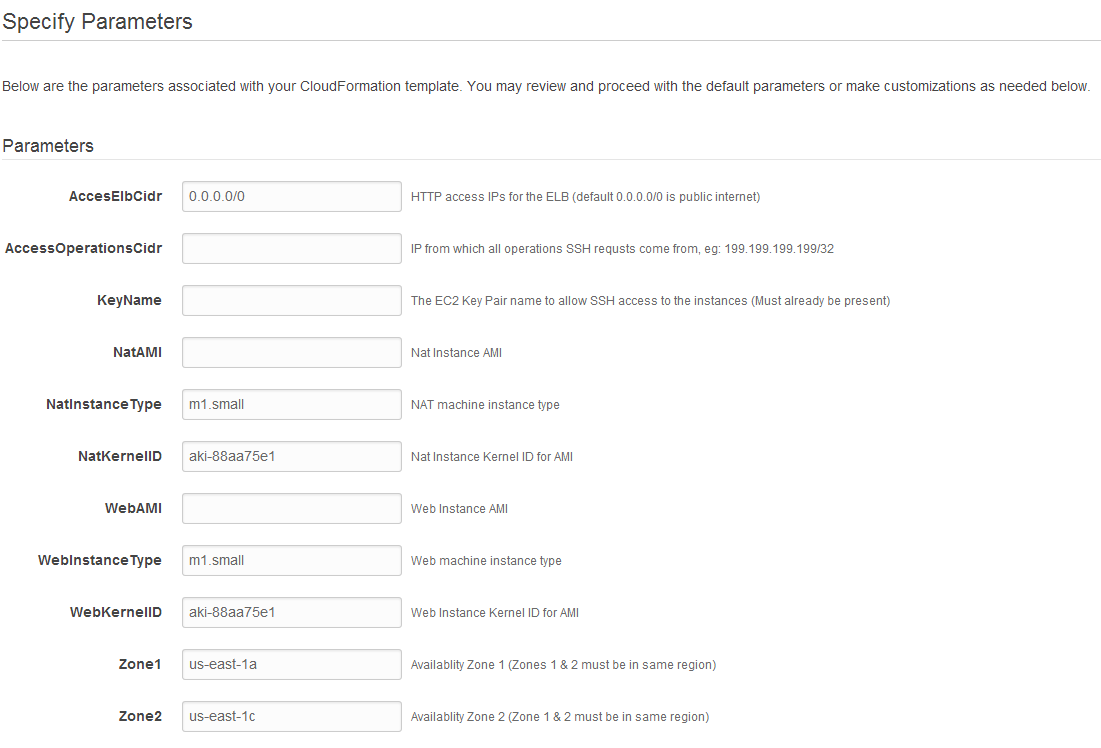 It will take a few minutes for the Stack creation process to execute.

The EC2 Console should show the running Nat and Web instances in the two availability zones.

To access web instances on the second availability zone will require the Nat2 instance to be configured in a similar way. In our case the result would allow the Web 2 instance to be accessed with:

Assuming that your Web AMI is running a web service on port 8080 then the Load Balancer should have started up and the two web instances should be considered available:

If the status shows “0 of 2 instances in service” then the Web instances may not be responding on port 8080 to the health check.

In our case we could then hit our website on port 80 of the ELB to see our test page.